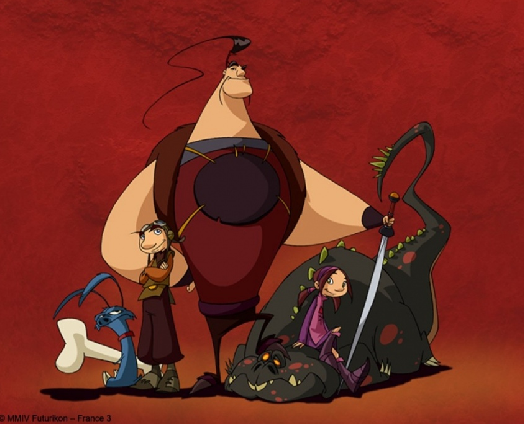 Dragon Hunters (original French title: Chasseurs de Dragons) is a cartoon series created by Arthur Qwak and produced by the French company Futurikon. It follows the adventures of two hunters for hire, Lian-Chu and Gwizdo, through a medieval world of floating land masses that is terrorized by a widely varying menace of monsters known collectively as dragons. A 3-D feature film and a videogame based on the film have also been released.

In an interview with the authors of the show Arthur Qwak and Guillaume Ivernel pointed, that the movie was "the story of how Lian-Chu and Gwizdo became real dragon hunters in their own rights". About Zoe they also confirmed that it was a children's version of a future warrior, "like a cross between Candy and Jeanne D'Arc". We learn, that Zoria was born as Zoe in the episode "Man of the dragon". She was a sickly, but cheerful orphan and found the Snoring Dragon Inn together with Lian-Chu, Gwizdo and Hector (who probably spent their earned money during their hard and long way on foot). Staying in the tavern, she became the adopted daughter of Jeanneline and turned into a redhead beauty after a while.

The airship "St. George" was bought and mastered by the hunters after they began to receive serious orders and earn enough money. Perhaps, with the advent of the serious money, Gwizdo also had cured his eyes: he began to read without glasses, and the color of his eyes changed from brown to blue.

D'Jourab, who acts in the series as a killer of Lian-Chu's family and compatriots, could be easily a World Gobbler's predecessor in a deal of destruction of village Ke-Chan. Actually, we don't see any residents of a village at the beginning of the film, what means, that the fire that engulfed the area, could be preceded by anything you want, including a failed dragon hunt of villagers. After the World Gobbler's death the heroes don't stammer about him, leaving global horrors associated with him in the past. The travel made them a bit more mature and gave Lian-Chu an opportunity to turn to the other important and unpleasant details of his childhood, like another scary dragon coming to the village or the family's intrigues - in spite of the fact that Lian-Chu's memory could be distorted for the years. Anyway, the big guy decides all important questions of his past, strictly depending on his capabilities.

The action of the series takes place roughly 10 years after the events of the movie.

The heroes aren't tramps anymore. They settled in the tavern "Snoring dragon", where they have to pay a round sum for accommodation and in parallel with this - bring up the little daughter of the hostess. Zoe already grew up and mastered the craft of guys. But even during the peaceful times their Adventure doesn't keep itself waiting: as always, work obliges! They will know a lot of interesting and unexpected about their chosen job. To succeed, they should, day in and day out to learn from their mistakes and get out of the most incredible situations...

The show's theme, "The Dragon Hunters Song", is performed by the English rock band The Cure. This track was available as a single and a track on the German compilation CD Toggo Music 11 in 2005, both now out of print.

1. Thy Name is Dragon

4. The Return of Roger

5. Little Rumble on the Prairie

7. A Fist Full of Veggies

12. The Strange Taste of Cocomak

13. The Conjunction of Three Moons

31. Dragon in the Hearth

43. The Legend of the Rain Dragon

48. The Conquest of the Town

Retrieved from "https://dragonhunters.fandom.com/wiki/Dragon_Hunters?oldid=5644"
Community content is available under CC-BY-SA unless otherwise noted.