Gwizdo is Lian-Chu's childhood friend and fellow hunter-for-hire. His name is of Polish origin. He is the main planner of the group and negotiates contracts with people who are terrorized by dragons. Unlike Lian-Chu, he tends to be a coward and a greedy swindler. When confronted by a dangerous enemy he often runs away in fear and leaves most of the fighting to others, but sometimes he has enough confidence in himself to give a helping hand and support his friends in a fight. Though loudmouthed, impulsive, and selfish, Gwizdo is still a good man and continues to remain loyal to those he calls friends.

Like Lian-Chu, Gwizdo grew up in an orphanage. And unlike Lian-Chu, he never knew his parents because he became an orphan shortly after his birth. In childhood he was distinguished by his fearfulness and was ridiculed and mocked by the other orphans. His main retreat was the study of the various contracts, which further determined his choice of work. Looking at the physical talents of Lian-Chu, the little guy found a perspective to work with him in team by the name of Dragon hunters as the best in terms of free earnings, despite the huge number of dangers associated with this difficult, but still sought after metier. In his early twenties Gwizdo is shown as a rough, impatient and fidgety lad, besides, he had a little trouble with vision and couldn`t read without glasses. Over the years he gets rid of his disease to perform high quality written work and acquires all the necessary manners to negotiate with clients - like his unforgettable word-parasites - which are particularly noticeable not only in the cartoon series, but also in the comics.

In his early thirties he manages to revise some of his views on wealth as a result of many difficult situations in life, though, as a rule, he does not abandon his attempts to get rich. In the depths of his soul he wants to be not worse than his noble friend; in this way, during the Season 2 Gwizdo even slays a few Dragons independently, despite his many fears and his weakness. At the same time he develops his erudition and ability to stay cool in high-risk situations. Also, in the Season 2, he writes a book about his experiences fighting dragons. From an early age Gwizdo is a talented storyteller and actively enjoys it. Thus, in the tavern he acquaints visitors with many heroic tales, which is the main way he attracts customers.

Probably, the most outstanding Gwizdo`s quality is the willingness to meet the man of any race, creed, and the level of civilization, on his own terms when it comes time to negotiate on the protection against the Dragons. Even if Lian-Chu is not near, the little guy will know how to find the most profitable loophole in a conversation with the worst human being of all possible clients. Gwizdo owes this resoluteness to his troubled childhood in an orphanage, where he constantly suffered from attacks of bullies who exceeded him with their growth and strength. Since this time, he also learned not to be squeamish about any tricks to achieve the desired. He rarely admits his mistakes, to not lose the face - even if he realizes that his life depends on the patience of people around. As the saying goes: such man is afraid of blows, which never got them.

Gwizdo shows himself as a skilled pilot of the airship of his team, the St. George and can perform enough complex tricks, sitting behind the helm. During the whole series, in addition to his customary pilot's cap, he wears pilot's googles to protect his eyes, while in the movie he only uses them when reading and writing. Gwizdo is well-educated, being one of the few people who can read, write and count. Moreover, he is well-versed in geography and heraldry and is highly knowledgable of Dragons. What Lian-Chu determines empirically, such as the Dragon`s weak point, Gwizdo can learn in advance from some written sources, and this greatly facilitates the work of his friend. Besides, the little guy has a developed sense of humor, which often saves his restless mind in the hopeless situations. As a bare minimum, it is shown on the kitchen with his pretty poor cooking skills.

Sometimes Gwizdo sinks his head in his hands and begins to call himself a failure. In his way of life one can only envy his stock of luck. This usually unarmed and almost defenseless little guy has survived in at least fifty situations where far more powerful hunters were killed. In contrast to his giant friend, Gwizdo has a quick tongue and a very fragile сonstitution. As such, his trump cards in a matter of survival are his flexible mind, delicate ways, and quick feet. Being an experienced traveler, who perfectly climbs trees and finds shelters, he can remain unscathed in the dangerous area for a while. However, Gwizdo can not boast of the prolonged physical endurance, often falls into a stupor during an emergency, barely can hold any serious weapon in his hands and doesn't know how to swim. Paradoxically, sometimes all these sources of his problems may turn into decisions of other problems. Of course, in some situations wouldn't have been any luck, if there wouldn't were his faithful friends. Knowing this, he is ready to show some reciprocity when this is just possible for him. 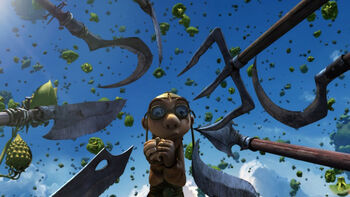 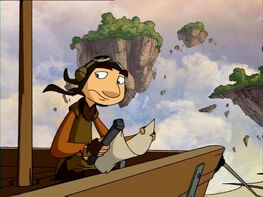 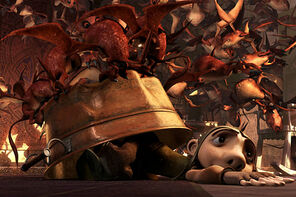 Gwizdo runs for his life 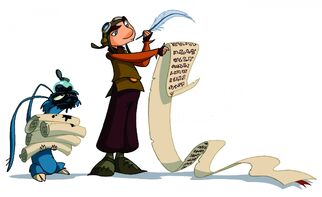 Gwizdo & Hector get to work 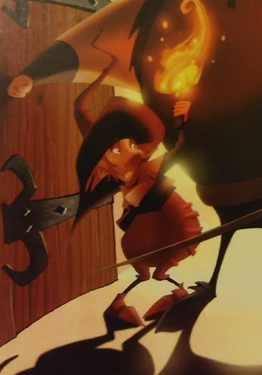 Prototype Gwizdo
Add a photo to this gallery
Retrieved from "https://dragonhunters.fandom.com/wiki/Gwizdo?oldid=5819"
Community content is available under CC-BY-SA unless otherwise noted.