Jennyline runs the Snoring Dragon Inn, where Gwizdo and Lian-Chu live. Her name is given as Jennyline on the DVDs and Janelynn on the official website. The German variation of her name is Jeanneline.

Powerful and authoritative hostess, Jeanneline firmly keeps her huge tavern for many years. She has had three past marriages, the last of which has resulted in Zaza. She worries about Zoria and blames the guys in the fact that under their influence she chose a life full of dangerous adventures, while Jeanneline already wanted to make her married and to have grandchildren. However, her patience produced by years helps her to accept the choice of her adopted daughter.

Gwizdo and Lian-Chu owe her an ever-growing debt for room and board and often take her loans for accommodation. Month after month in these conditions she reminds them about responsibility and loads them of additional houseworks as timely payment for housing. Jeanneline abates their conditions of payment not only because she appreciates them as helpers. She obviously likes Gwizdo and cherishes a dream to marry him - what frightens him and gives him the incentive to look for the new contracts immediately.

She is a heavyset woman who is short-tempered and strict, caring mother and careful mistress. Despite her illiteracy, Jeanneline is talented in control of the economic situation and, of course, in cooking delicious dishes of the Dragon meat.

Jeanneline doesn`t like to leave her tavern and most of the time she`s engaged in its accomplishment and sometimes - in its protection. Apparently, she is not against the huge number of trophies, which the guys provide her - perhaps, because it gives to her house of greater authority. 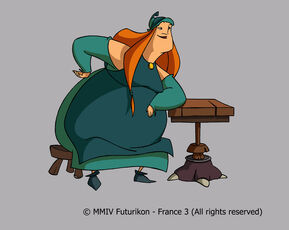 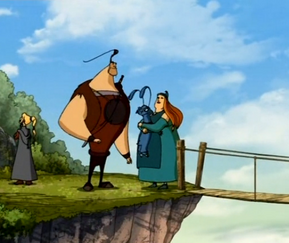 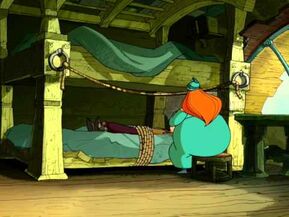 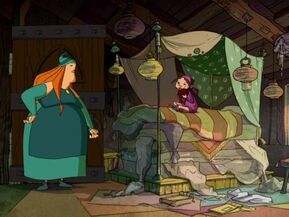 caring mom
Add a photo to this gallery
Retrieved from "https://dragonhunters.fandom.com/wiki/Jennyline?oldid=5655"
Community content is available under CC-BY-SA unless otherwise noted.