Start a Wiki
Lian-Chu is a muscle-bound warrior - skilled Dragon hunter and Gwizdo's childhood friend. His name is of Chinese origin. Wise, brave and compassionate, hardy and unpretentious, he is usually the one who choose to enter a fight for the sake of other people's safety, which often happens to be against Dragons.

Born in Ke-Chan on the south island Vertlombrick, he became an orphan in early childhood, when a huge Dragon destroyed his native village. In the mother Hubbard's Farm he was very diligent and has enjoyed the respect of other children for his strength, but of all of them, only the lonely Gwizdo became his inseparable friend. The natural kindness of Lian-Chu, as his propensity to protect the weaker kids, apparently was one of his main motives in choosing his job. In the comics, it is known that in adolescence Lian-Chu had a coach, with whom he had met by chance - Grolok, the mighty wandering hunter, later killed in a battle with a Giant Red Bucaramanga, the victory over whom he was possessed (in one day Lian-Chu successfully completed Grolok's work, finding his remains in the Dragon's mouth). Sometimes Lian-Chu's childhood nightmares come back to him, so he needs the friendly support, which Gwizdo renders him, without thinking. It was thanks to his stories, Lian-Chu was able to sleep in the first days spent in the orphanage. He prefers not to remember the days preceding these new happy times of childhood. In his early twenties Lian-Chu is seen as a constrained, extremely modest and stooping guy, that creates an impression of clumsiness. However, with time, he gains the confidence and corrects his posture - like a sense of dignity.

In his early thirties Lian-Chu found out that he wasn't the only survivor of Ke-Chan, when he received a letter from his uncle. Unfortunately, as he guessed later, this man was the main cause of people's death, since he saw the dragon, but didn't want to warn his village of danger. Thus, the true giant's family are still his childhood friend and the residents of the "Snoring dragon" inn, that he willingly accepts.

Lian-Chu is a born defender of the weaker creatures, including not only people, but also small animals and even such dragons, which he does not recognize guilty of causing harm to humanity. This manifests itself most often not in words but in his deeds. Maybe he is not yet very perfect as a bodyguard: like many giants, he has a bit slow perception of reality and he doesn't like to be in a hurry. Gwizdo has a lot of reasons to reproach Lian-Chu that he comes to the rescue mostly at the very last moment. But, it must be admitted, his giant friend always comes for help with the most beautiful effect!

This tall and muscular hero is a hereditary hunter, amazingly strong and dexterous as a result of many years of training and a rich work experience, familiar with the Dragon nature and well oriented in the wild. He is able to walk and fight with giant upper part of body, while having very small legs. He doesn't see any problem in a multi-day hiking in the formidable areas, which are usually uncomfortable for Gwizdo. With the huge stock of survival abilities, Lian-Chu remains very unassuming in his life style and can sleep almost anywhere. Also, he became a very proficient knitter due to the early lessons of his mother: this skill often helps his team, when comes time to repair clothing. Hard work, combined with great endurance simply make Lian-Chu the master of all trades. Usually his help with the housework is indispensable in the tavern. Actually, with apparent brutality he remains a very humble, sensitive and polite young man, who managed to preserve the little boy's curiosity and innocence. Thereby, throughout his life Lian-Chu easily finds common language with children. He likes to walk in the nature and tends to isolation. At the same time he doesn't hesitate to ask questions to his friends on different occasions, if he feels that he doesn't understand something in everyday life.

Lian-Chu combines courage and naivety the bizarre way. In the human world he often relies on Gwizdo's knowledges because of the danger of being repeatedly cheated. Like the majority of provincial residents, this terse and ingenuous big guy can't read. In addition to this, Lian-Chu can count only to 10 but manages to not suffer a lot from that because of his moderately resourceful mind. He starts to feel awkward when he has to speak in front of a large audience - so, the guys made a clear division of responsibilities: the time to talk is Gwizdo's, the time to act is Lian-Chu's. However, the giant is also gifted to choose the words and knows a lot of wise proverbs for almost every occasion. He often feels his responsibility for the people's safety, even if they aren't friendly to him, and he is always ready to help any civilians - at least, if they don`t resist their salvation too active... Lian-Chu's upright and honorable personality stands in sharp contrast to that of Gwizdo's most often cowardly and swindling nature. Despite this, they continue to remain the best of friends. 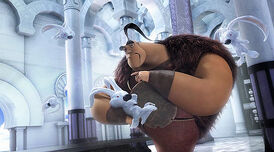 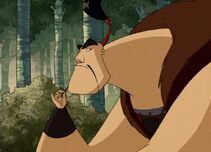 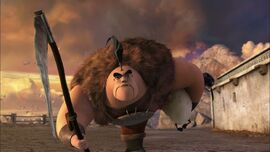 Lian-Chu on the sheep protection 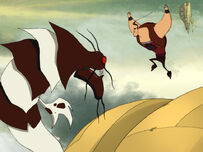 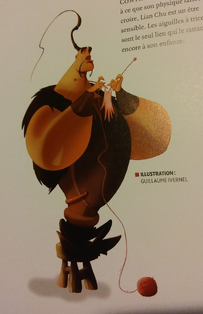 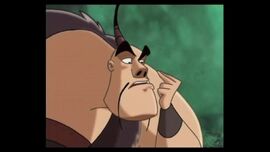 Lian-Chu in the 2D Pilot. 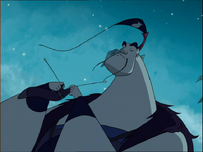 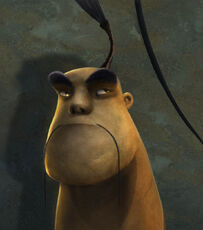 Bust of Lian-Chu made for the movie. 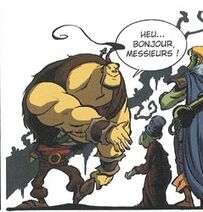 Lian-Chu from the second comic. 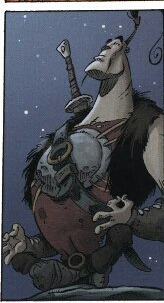 Lian-Chu from the first comic.
Add a photo to this gallery

Retrieved from "https://dragonhunters.fandom.com/wiki/Lian-Chu?oldid=5811"
Community content is available under CC-BY-SA unless otherwise noted.