Zoria is Jennyline's oldest daughter, and is an accomplished dragon huntress. Like Zaza, she was inspired by Gwizdo and Lian-Chu at a young age, and trained with them to learn the moves and arts of the business. She makes few appearances in the cartoon series, but is well known by the main characters.

In season 1 episode 13 for example, the title is Desperately Seeking Zoria.

In season 2, episode 50 (The Master of the Dragon) she is revealed to be Zoe from the movie. She can be easily called a beautiful flower, which blooms in the wild and rebellious era of invasion of the dragons in the peaceful countries. Will not be redundant to add that she is destined to become one of the hopes of mankind, lost in the chaos and destruction of previous centuries...

Before meeting her friends, Zoe, whose parents died during the epidemic of cholera, lived with her old and arrogant uncle Lord Arnold in a Castle, where she was reading a lot of books about heroic deeds of knights, that inspired her on adventures and gave her dream to become the Dragon huntress. As a child, she had the rare good humor, talkativeness, curiosity and determination, which became the starting point for a memorable trip of four heroes-newbies to the World's edge. After Arnold was obnoxiously rude to her and both Gwizdo and Lian-Chu stood up for her, she followed after them and ultimately to the Snoring Dragon Inn. Zoe was raised by Jennyline like her oldest daughter and in parallel with this she absorbedly learned with Gwizdo, Lian Chu and Hector the tricks and niceties of the Dragon hunt.

Today she lives by the name of Zoria and is an independent Dragon huntress in her own right. She is not a resident of the inn, but visits it occasionally.

After some lively and, probably, nerve-racking years the tender little golden-haired girl became the tall redhead young lady, fragile, but enough brave, strong and noble huntress, quite capable of carefully use a sword in her tiny hands, formerly accustomed to the pages of books and needlework. Since her childhood, Zoria has a very strong will. This is clearly illustrated by the following episode of her life: a victim of sexism, she has donned a male disguise in some parts to get more bounties, but in the end she removes her mask and becomes the first woman, who gets the license for the Dragon hunt - like in her childish dreams. And in spite of this, in her early twenties she is still a usual girl, which is the source of any anxiety and errors associated with the personality formation. 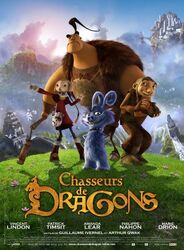 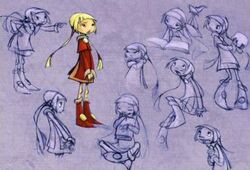 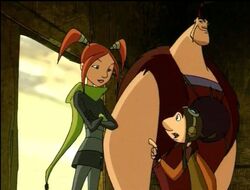 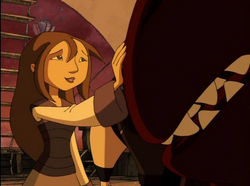 Zoria's loyality to the good dragons
Add a photo to this gallery
Retrieved from "https://dragonhunters.fandom.com/wiki/Zoria?oldid=5754"
Community content is available under CC-BY-SA unless otherwise noted.